Pierre Pringiers, Chairman of the Sail Lanka Yachting Group which manages the Port City Colombo Marina said, “The 145’ Kalizma – built in 1906 by GL Watson in Scotland – arrived from the Maldives on Sunday, marking a milestone in the development of Colombo as a Superyacht destination. To see this historic Superyacht berthed at the marina is the fulfilment of a dream for me, and is a fitting tribute to our staff who have efficiently handled the logistics and administrative details. I also want to express my sincere thanks to the officials of the Port City Colombo and the Customs, Immigration, and all the agencies involved. I’m hoping that the arrival of Kalizma will augur well for the success of visiting Superyachts and the opening up of Sri Lanka for cruising and yacht charters – one of the new pillars of the tourism industry.”

MY Kalizma has served in both world wars as part of the British Royal Navy. It was in 1967 that two of Hollywood’s most famous actors, Richard Burton and Elizabeth Taylor chartered the yacht for a cruise on the Mediterranean. They fell in love with the yacht and Burton bought it and gifted it to Taylor. They named the yacht Kalizma, after their three daughters, Kate, Liza and Maria. 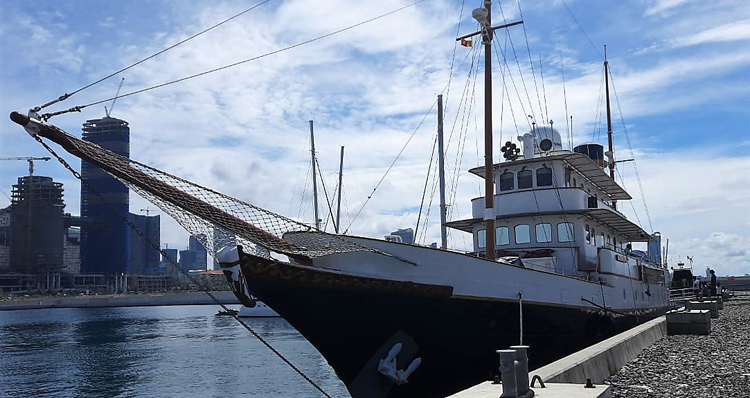 Aashim Mongia, Managing Director of West Coast Marine Yacht Services in India who manage the yacht said, “MY Kalizma has been cruising the Indian Ocean region through the last season. The opening of the Port City Colombo Marina is a boon for Superyachts that visit the region, and hopefully we will see more Superyachts coming into the Indian Ocean Region for nautical tourism. We are thankful to the Sri Lankan authorities, the Sail Lanka Yachting Group and the management of Port City Colombo, for their assistance in making MY Kalizma’s visit a success. With this first visit we are hoping to bring more yachts to Sri Lanka to explore the untapped potential that the island nation has to offer.”

The Port City Colombo Marina is expected to be one of the region’s most modern and largest international yacht marinas. When it is fully operational, it is expected to have the facility to anchor 200 yachts and become one of the largest such venues in the region. It is also expected to have a mini yacht repair facility, duty-free terminal, customs and facilities for several other maritime related businesses.

Sail Lanka Yachting Group, founded in 2014 by Mr. Pierre Pringiers, operates a fleet of 10 luxury catamarans around the island (www.sail-lanka-charter.com) and has been designing manufacturing boats and developing marine infrastructure and boats for export since 2008. Sail Lanka Yachting Group is also now managing the Port City Colombo Marina operations.

The vision of SLYG is to develop Sri Lanka as one of the main hubs for boat and yacht building, ownership, and chartering in South and South-East Asia and make Sri Lanka a key world-class destination for Experiential Tourism and Marine Tourism

The Quote:
“Success is not final; failure is not fatal: it is the courage to continue that counts.” – Winston Churchill