Director General of the Organization for the Prohibition of Chemical Weapons (OPCW) Dr. Fernando Arias, received the credentials of Ambassador Aruni Ranaraja as Permanent Representative of Sri Lanka to the OPCW at a ceremony held at the Headquarters of the OPCW in the Hague on Monday, 03 May 2021.

After welcoming Ambassador Ranaraja, the Director General briefed her on the progress achieved by the OPCW on chemical weapons disarmament and non-proliferation activities thus far and elaborated how OPCW envisaged to address the new and emerging chemical weapons threats, as well as to support capacity building in OPCW Member States through its flagship project – the ChemTech Centre.

The Ambassador, while acknowledging the assistance extended by the OPCW to build Sri Lanka’s national capacity in chemical handling, including the training assistance provided by the OPCW over the years, requested further partnership in the areas of capacity building of local chemical scientists, exchange of scientific and technical information, assistance to upgrade Sri Lanka’s laboratory services, conduct awareness programmes on chemical safety and responding to chemical emergencies.

Ambassador Ranaraja also recalled that several Sri Lankans had held positions in the OPCW, and expressed the keen interest in continuing to increase Sri Lanka’s contribution to the organization through its rich pool of human resources.

Ambassador Ranaraja encouraged the OPCW to consider Sri Lanka as a regular host nation to hold international and regional events, similar to the International Seminar on “The Chemical Weapons Convention and Chemical Safety & Security Management” for Member States of the OPCW in the Asian Region’ which was held in December 2019.

Both the Director General and the Ambassador underscored the necessity of having strong international cooperation and commitment for the prevention of the usage of chemical weapons by non – State actors and not to succumb to politically motivated agendas. 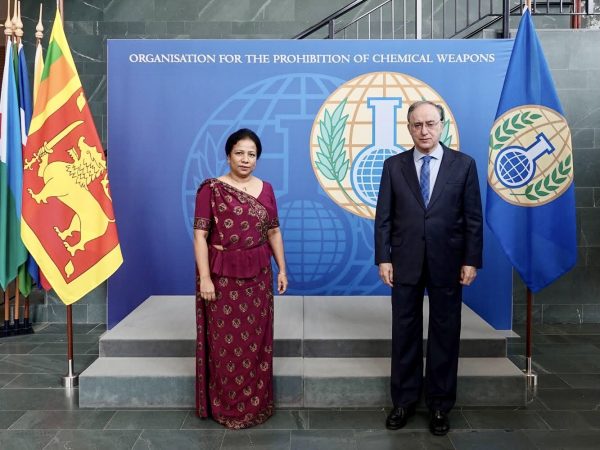 Deputy Director-General Ambassador Odette Melono, Director of the External Relations Division and Deputy Chief of Cabinet to the Director General were associated with the discussion.

Sri Lanka is one of the early signatories of the Chemical Weapons Convention, having signed it on 14 January 1992 and ratified on 19 August 1994 and remains firmly committed to the aspirations of the OPCW and continues to fulfil its obligations under the Convention.