Last morning (05), a discussion was held at the Prime Minister’s Office at the Parliament Complex under the patronage of Prime Minister Mahinda Rajapaksa to develop Kurunegala, Mattala, Lunugamvehera, and Beliatta as fully modern cities.

Prime Minister Mahinda Rajapaksa concentrated on proposals to build the four cities as modern cities, instructing Ministry officials on how to carry out the projects in his capacity as Minister of Urban Development.

Officials of the Ministry of Urban Development and Housing explained how Beliatta is being developed with a modern shopping complex, a wholesale market and weekly market with all facilities, a car park, a city park, a new bus stand, a multi-purpose building and a middle class housing complex.

Attention was also drawn to the construction of a dual lane road system, outer and inner circular road as well as a four lane road network.

The Prime Minister also focused on the establishment of trade, industry, residential facilities, tourism, health facilities as well as agricultural promotion zones centered on Mattala Airport and the development projects implemented in the Mattala-Lunugamvehera area. 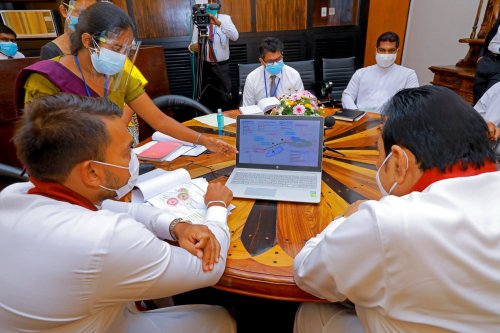 ICTA: Digital for Everyone National Initiative launched towards enabling a technology-based society

Rs. 1 Bn worth of Micro Leases disbursed by HNB to 400+ Agri MSMEs

Special notice on reopening of wine stores – Department of Excise