President Gotabaya Rajapaksa has stated that he will take up the challenge of making Sri Lanka the first country in the world to completely eliminate the use of chemical fertilizers and will not reverse the steps already taken on the initiative.

The absence of any country in the world that has stopped using chemical fertilizers is not an obstacle to achieving the goal, the President said urging all to work together to educate the farmers and create a healthy generation instead of just talking about it.

The President made these remarks at a discussion held at the Presidential Secretariat this morning (29) to raise awareness on the ban on import and use of chemical fertilizers, pesticides and herbicides.

“The government must guarantee the right of the people to a non-toxic diet to produce a healthy and productive citizen,” the President said recalling that the “Vision of Prosperity” policy statement promised to accelerate the production to fully use organic fertilizer for agriculture in Sri Lanka over the next decade.

The 20-point Cabinet Memorandum aiming at a green socio-economic model of sustainable solutions to climate change and laying the foundation for making it a reality was presented to the Cabinet recently,

Sri Lanka spent U. S. $ 221 million in 2019 to import chemical fertilizer and this amount is expected to rise between US $ 300 – 400 million with the price increase of crude oil, according to the President. 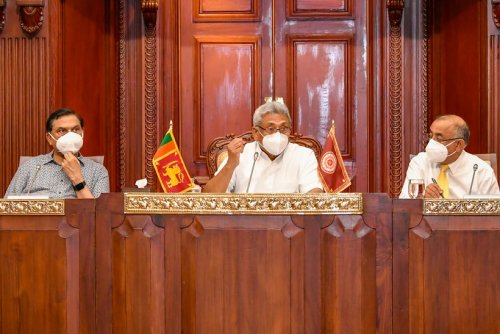 President Rajapaksa pointed out that despite the huge expenditure on chemical fertilizers, herbicides and pesticides, there has been no qualitative increase in agricultural production adding that soil infertility has led to declining yields and loss of biodiversity..

The use of chemical fertilizers and pesticides pollutes rivers and streams and poses a serious challenge to quality drinking water supply. Government spending on many non-communicable diseases, including kidney disease and cancer, is rising every year. Loss of livelihoods of rural people, deteriorating health and declining productivity of the people have become a challenge to the country.

The President noted that problems may occur at the beginning of the program. But the building of a sustainable green socio-economic pattern should not be delayed.

“We need to identify the right solutions to the problems that arise. Farmers may think that giving up the use of chemical fertilizers will reduce production.” If so, the President guarantees that the loss of income will be compensated from the Rs. 50 billion spent annually on the chemical fertilizer subsidy.

A group with proper training and education as well as a feeling for the country and the environment is required to implement the program, the Head of the State noted. The President also said that those who do not like or think differently about the program will not be deterred from leaving at the outset. The President said he is ready to personally reach out to the farming community to overcome the challenge.

The President said the government will directly get involved to provide all necessary facilities to the producers to encourage the production of organic fertilizer at the district level.

Basil Rajapaksa, Chairman of the Presidential Task Force on Economic Revival, said protests can come as it is a sensitive subject for many people engaged in agriculture but the goal could be easily achieved through the participation of all parties including religious leaders, farmers’ organizations, professionals, researchers, government officials and media support.

Basil Rajapaksa pointed out the need to expand the organic fertilizer market in a way that is convenient for the farmer. – PMD