Elon Musk’s Tesla made a strong start to the year with profits up and record deliveries of its electric cars.

It came despite production hurdles due to a global shortage of computer chips that has also hit other carmakers.

Profits for the first three months of the year were $438m (£315m), up from $16m last year, bolstered by sales of Bitcoin and environmental credits.

But the profits were dented by a $299m payment to Mr Musk as part of a controversial compensation plan struck in 2018.

Mr Musk claimed Tesla’s Model 3, its midsize sedan, was the “best-selling luxury sedan of any kind in the world” for the quarter.

He also predicted the company’s midsize sport utility Model Y would become the best-selling car or truck of any kind in the coming years.

“We’ve seen a real shift in customer perception of electric vehicles, and our demand is the best we’ve ever seen,” Mr Musk said. 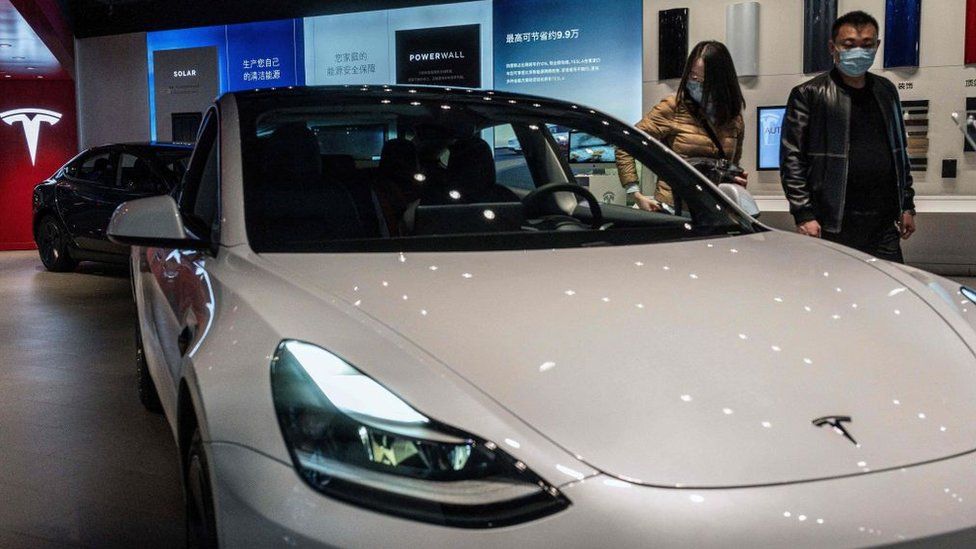 The company said the Model Y had so far received a strong reception from consumers in China, where Tesla began manufacturing last year.

China is possibly the world’s most competitive market for electric vehicles, with hundreds of manufacturers vying for a slice of the growing market.

Bitcoin move
However, not all of the company’s revenues came from selling cars.

The company bought $1.5bn of Bitcoin during the first quarter, but then cut its position by 10%, which contributed $101m to its revenues.

Tesla recently made it possible for customers to purchase the cars in Bitcoin, allowing it to accumulate more of the cryptocurrency.

“It is our intent to hold what we have long term and continue to accumulate Bitcoin from transactions from our customers as they purchase vehicles,” the company’s chief financial officer, Zachary Kirkhorn, told investors.

Tesla also earns credits for exceeding emissions and fuel economy standards and then selling them to other carmakers that fall short so they can avoid penalties.

The company earned $518m from sales of those credits in the first quarter, an increase of 46% over the same quarter in 2020.

Tesla said it delivered roughly half a million cars in 2020, and 185,000 in the January-to-March period.

The company expects its deliveries to increase by 50% annually, and is ramping up production at its existing facilities in California and Shanghai while it builds its new factories in Berlin and Texas.

Tesla is the world’s most valuable car company, with its share price pushed higher by investors betting on strong growth in electric vehicles in the coming years.

However, the company makes far fewer cars than companies such as Toyota and Volkswagen, which each sold more than nine million cars last year.

Nicholas Hyett, equity analyst at stockbroker Hargreaves Lansdown, said that despite the generally positive results, there could be problems ahead.

“There’s the complete lack of guidance around near-term production headwinds,” he said. “A global shortage of computer chips is expected to limit production from all manufacturers in the immediate future, and Tesla won’t be exempt. Given the ongoing importance of its production ramp up, it may even be more heavily impacted.”

And despite Tesla making a profit from sales of Bitcoin, Mr Hyett said there were many sceptics: “Tesla has made some $101m on its investment so far, which is all well and good, but huge gains and losses aren’t really what corporate treasuries are all about.

“Investors could well argue that if they wanted to have exposure to Bitcoin they would have bought some themselves and don’t need Tesla to do it for them.

“Still Tesla has never played by the rules – so far that hasn’t stopped it being a winner.”

AstraZeneca: US to share up to 60m vaccine doses