The increase in exports to the pre-pandemic levels, the notable increase in workers’ remittances and the relative stability in the domestic foreign exchange market supported Sri Lanka’s external sector in February 2021, the Central Bank reported Friday in its External Sector Performance review for the month.

The trade deficit in February 2021 broadly remained unchanged at the level reported a year ago.

Meanwhile, the cumulative deficit in the trade account during January – February 2021 narrowed to US$ 1.227 billion from US$ 1.304 billion recorded over the same period in 2020. 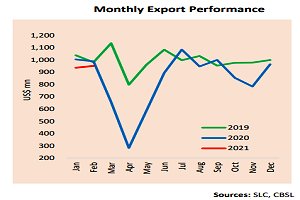 Earnings from merchandise exports in February 2021 declined by 3.7 percent to US4 952 million, compared to February 2020. Export earnings exhibited a recovery towards pre-pandemic levels since the peak of the second wave of COVID-19 spread in Sri Lanka, reaching levels close to those recorded in the same month of 2020 (US$ 989 million) and 2019 (US$ 981 million), the Central Bank said.

Export earnings from agricultural goods increased by 5.9 percent in February 2021 on a year-on-year basis, mainly due to the increase in the export of spices, coconut and tea. 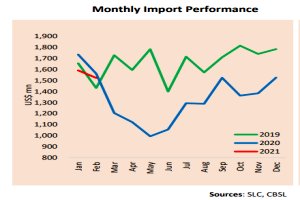 Foreign investment in the government securities market recorded a marginal net outflow of US$ 2 million in February 2021, the Bank said.

The Central Bank has settled the SAARCFINANCE swap facility of US$ 400 million in February 2021 upon maturity.

The exchange rate remained relatively stable during February 2021 due to increased customer inflows to the domestic foreign exchange market. However, overall, the rupee recorded a depreciation of 6.8 percent against the US dollar up to 16 April 2021.

Decisions Made to Curb Covid-19 today