Boosting its fan-first experience for users, Viber launches an official global FC Barcelona Community in Russian, on top of its English, Arabic and Spanish versions, and announces a Q&A with 5 of the club’s players in March

Rakuten Viber, one of the world’s leading apps for free and easy communication, unveils a series of new initiatives going into the 2020/2021 season for its longtime partnership with,FC Barcelona. In addition to launching an official global FC Barcelona Community in Russian, the company plans to publish a special Q&A in the communities with five players in February: Marc-André ter Stegen, Frenkie de Jong, Miralem Pjanić, Sergiño Dest, Clément Lenglet, and Antoine Griezmann.

Viber’s FC Barcelona cooperation kicked off in the 2017/2018 season, and Viber has served as the club’s official channel of communication since. As the football season heats up and we march toward the new decade, Rakuten Viber kicks off a new chapter of its partnership with the club, building a fan-first experience for its users all the way through various touch points on its messaging app. To establish a meaningful connection between players and fans on the app, Viber will offer initiatives including: 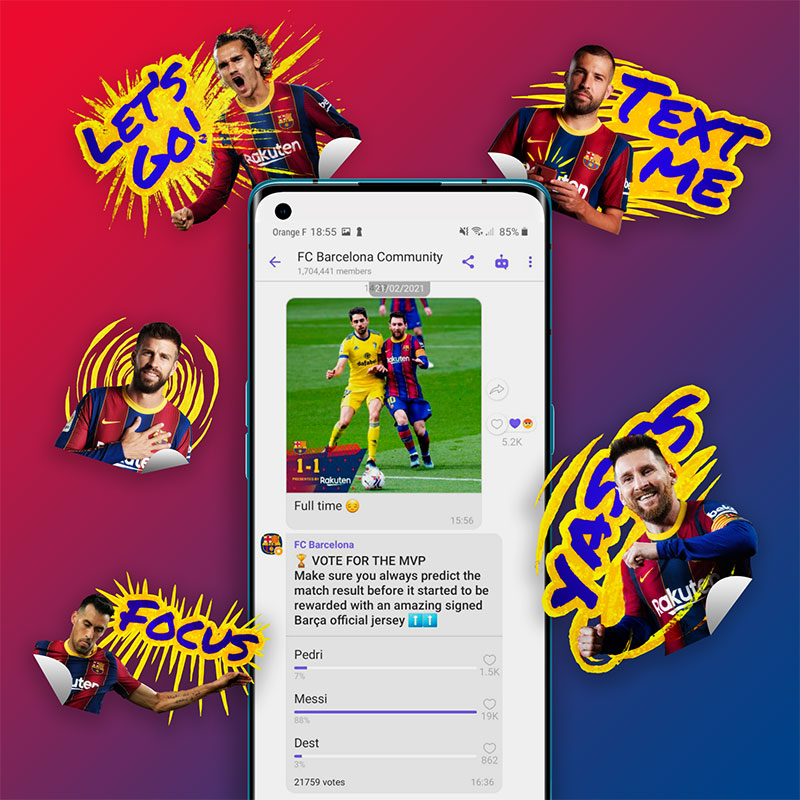 ● Meet & greet the players – An exclusive Q&A with current FC Barcelona players, in which they answer 5-10 pre-selected questions from fans. Fans have the unique option to send their questions via member-to-member (m2m) messaging in all of the FC Barcelona Viber Communities, and the team choosesthe best ones.

● A day with a legend – A unique opportunity for the fans to spend a day with an FC Barcelona legend player in the Community, where he makes a Community takeover in March and the fans can take part in a standard day of his life.

● Vote & win – Viber users are granted a monthly opportunity to win autographed 2020-21 jerseys by predicting the winner of the match , nixing the complicated rules and points systems from the previous seasons and making it simple and easy for the fans to participate

● Fan stars – fans will have the opportunity to be the stars of the community every month by sharing their personal story and journey in connection with the club.

The app now offers a global community of the club for the first time in Russian in addition to its global communities in English, Spanish and Arabic, for fans to chat about games and players stats. Viber’s users will also be able to send each other brand new FC Barcelona stickers from the app’s new sticker pack for this season, featuring the players faces. Unlike last year’s cartoon-based stickers, the new season’s feature a photo of the player’s face. It’s a very special sticker pack,as it features all the players from the new season, too !

“We’re delighted to double down on our fan-first FC Barcelona partnership going into 2021,” says Anna Znamenskaya CGO of Rakuten Viber. “This cooperation has been a success since it began in 2017, and we’re thrilled to bring fans closer to their team’s players through Viber, just as we connect between all of our users.”

Related to the FC Barcelona Russian Community launch, first team player Antoine Griezmann highlighted: “I’m so happy that we will be a little closer to our Russian fans now”, while Sergiño Dest expressed his satisfaction because “from now on, Barça will speak Russian to its fans”

At Rakuten Viber, we connect people. No matter who they are, or where they are from. Our global user base has access to a range of features like one-on-one chats, video calls, group messaging, and updates and discussions with their favorite brands and celebrities. We ensure our users have a secure and free environment to share their emotions.

Rakuten Viber is part of Rakuten Inc., a world leader in e-commerce and financial services. It is the official communication channel of FC Barcelona, and the official instant messaging and calling app partner of the Golden State Warriors.

FC Barcelona was founded in 1899 and is unique in many ways. The Club is owned by its more than 144,000 members. Since season 2004/05 they have won four of the Club’s five Champions League titles and ten of their 26 domestic league titles. Due to its very special personality, Barça is recognized as being ‘More than a club’. The team’s distinctive style of play is projected around the world by the best players and coaches of their time in combination with the club’s famous reliance on homegrown talent.

All of this goes hand in hand with its ongoing ambition to become the most admired, beloved and global sports institution on the planet. This mission is supported by such core principles as humility, effort, ambition, respect and team-work, while the club is also famed for its commitment to society, which is channeled through the FC Barcelona Foundation and its work to educate children through the positive values of sport. Such unstoppable growth in recent years has led to a global reach of more than 360 million fans on social media, being the sports club with the most followers on social networks.

Improving Sri Lanka’s market access to the US: Growing beyond traditional products

Showers expect in several places over most parts of the island

The selling price of a US Dollar against SL Rupee recorded Rs.204.62

Expack celebrates its women at workplace and calls for gender diversity

AIA are champions at the Inter Insurance Company Quiz Competition

Colombo ‘Park and Ride City Bus’ service to be expanded

Ranil Wickremesinghe expected to seat in the Parliament next month

Sri Lanka has issued Ramadan health guidelines to be followed

“Made in Sri Lanka’ brand built with strong hopes”