The Women Parliamentarians Caucus of Sri Lanka has extended their strongest support for Deputy Inspector General of Police (DIG) Bimshani Jasin Arachchi, who is the first and only female DIG of Sri Lanka.

The Women Parliamentarians Caucus announced that their forum will stand up for the professional rights and job security of Bimshani Jasin Arachchi, who has been promoted to the post of first female Deputy Inspector General of Police in Sri Lanka, without party affiliation and will fight for her justice.

Chairperson of the Caucus, Dr. Sudarshini Fernandopulle, State Minister Primary Health Services, Pandemics and COVID Prevention condemned the challenge to the appointment of Bimshani Jasin Arachchi who served as the Director of the Police Children and Women Bureau.

The Chairperson said that the cuacus was very pleased with the appointment of the Deputy Inspector General of Police (DIG) and that the appointment of a woman to a higher post in an institution such as the Sri Lanka Police, which is represented by a majority of men, is a sign of gender equality.

However, while expressing her displeasure over the situation against her, Dr. Fernandopulle said she believed that if Sri Lankan women were to be recruited into the police force, they should have the right to receive their promotions regularly.

The MPs pointed out that it is very unfair to try to deprive a woman of the opportunity to transcend a field in such an advanced world just because of her gender. 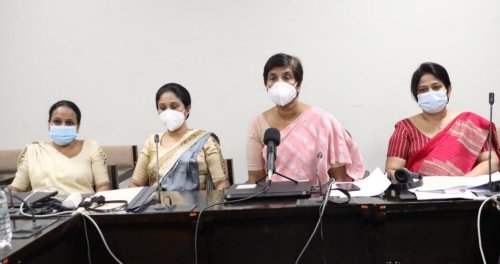 Expressing her views, Dr. Sita Arambepola, State Minister of Skills Development, Vocational Education, Research and Innovation, Vice Chairperson of the Women Parliamentarians’ Caucus said all women parliamentarians, regardless of party affiliation, condemned the involvement of certain groups in legal action challenging the post of DIG Bimshani and urged all women in this country as well as all parents who wish their daughters success to unite against such actions.

Speaking at the event, MP Rohini Wijeratne, Vice President of the Women Parliamentarians’ Caucus said that it was deplorable for the male community in this country to oppose Ms. Bimshani Jasin Arachchi’s promotion for doing her job properly.

The Women Parliamentarians pointed out that there are many examples of women being appointed to national leadership in Sri Lanka and appointment of Sirimavo Bandaranaike as the world’s first female Prime Minister, the appointment of Chandrika Bandaranaike Kumaratunga as the world’s first female Executive President, and the appointment of Shirani Bandaranayake as the Chief Justice are such examples. They said it was not appropriate to say that a woman could not hold the post of Deputy Inspector General of Police.

Police Legal Division Director, SSP Ruwan Gunasekara and 32 other Senior Superintendents of Police (SSPs) have filed a petition in the Supreme Court challenging the promotion of Bimshani Jasin Arachchi from the SSP post to the Deputy Inspector General post.

The Caucus has decided to request the Speaker to establish a Parliamentary Committee to inquire the injustice and malpractices against Women in Sri Lanka.

The Chairperson Dr. Fernandopulle further stated that the purpose of the Women Parliamentarians’ Caucus is to advocate for the rights of women in the legislature and in formulating legislation. Due to this, the forum will inform all political parties and encourage them to increase the contribution of women in active politics in the country, she said.