Payment of a monthly allowance to 3,332 employees of the power textile companies which were privatized 40 years ago commenced Friday (12.02.2021) at Temple Trees under the patronage of the Prime Minister Mahinda Rajapaksa.

Employees with less than 10 years of service in power textile companies privatized between 1980 and 1982 are entitled to a lifetime monthly allowance. Commencing the payment of this monthly allowance, the Prime Minister symbolically presented checks to several employees.

As per the Cabinet decision dated 15th July 2020, Rs. 95 million has been released from the General Treasury to the Department of Textiles to pay this monthly allowance. 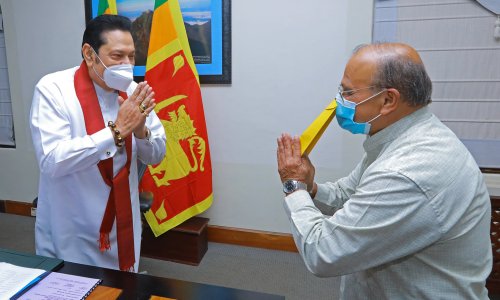 Addressing the gathering, Prime Minister Rajapaksa said that he was very happy to be able to provide a solution to a problem that he had been focusing on since he was the Minister of Labor.

When the state owned textile companies were privatized in the early 80’s the employees who had less than ten years of service lost their government pension.

“These people are scattered all over Sri Lanka. We are scheduled to complete the distribution of these checks by the 28th. From then onwards, the allowance will be credited to their bank accounts”, said Dayasiri Jayasekara, State Minister of Batik Handicrafts and Local Apparel Products.

CBSL to seek removal of surcharges on loans, leases before due dates – Prime Minister