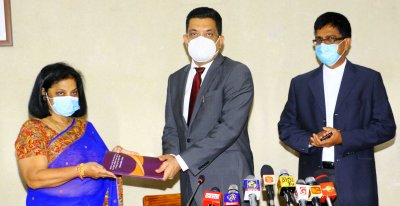 The committee was instructed to submit a full report on the incident within a month. Accordingly, the report was handed over today.

Expressing his views at the occasion today, the Minister of Justice said an unfortunate incident took place at the Mahara Prison on 29 November 2020.

“We looked at this incident scientifically and humanely. We want to find out why this happened and how it can be prevented in the future. For that we appointed a committee representing various relevant sectors. They submitted a report within a week. We presented the interim report to Parliament. We acted on the recommendations contained in the interim report. We will study these reports and take action to prevent such incidents in the future. It should be said that we appointed an independent committee. We have not interfered in that in any way. They have acted independently,” he said.

“We need to find out the truth about why this happened. Then we have to work scientifically. It should be noted that we appointed this committee on the instructions of the President and the Prime Minister,” he added.

He said that steps should be taken to identify drug traffickers and drug addicts among the prisoners incarcerated for drug offenses and rehabilitate the drug addicts and necessary legal amendments are being made for that.

The Minister said that about 8500 drug addicts have been released on bail to ease the congestion in the prisons and a large prison complex will be built in the future.

Necessary steps have been taken to improve the facilities of prison officers and increase the number of officers, the Minister said.

Secretary to the Ministry of Justice Attorney-at-Law Priyantha Mayadunne was also present at the occasion.