Quarantine curfew until 4 am on September 6 – PMD

It has been decided to extend the quarantine curfew which is in force until 4 am on September 6.

The decision was taken at the meeting of Special Committee on COVID-19 Control held at the Presidential Secretariat last morning (27).

The progress of the vaccination drive was reviewed at length during the meeting. The President instructed to inform the Medical Officers of Health to submit requests for necessary vaccines to cover those who are over the age of 30 and not received the vaccines so far. 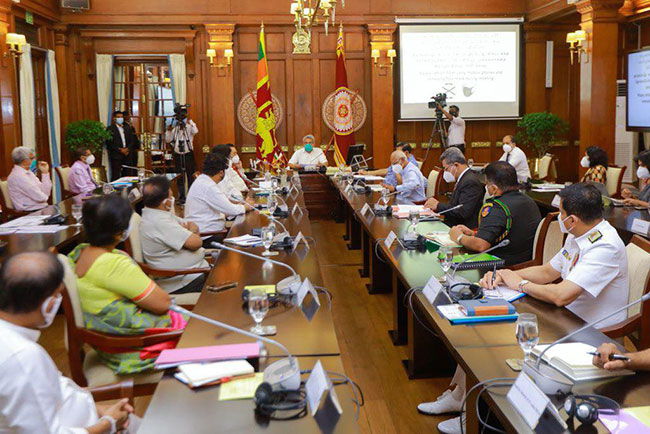 In the event anyone fails to obtain the first dose, it was mentioned that they are able to get the first dose from the centres where the second doses are being administered.

Prime Minister Mahinda Rajapaksa pointed out that local politicians should take action to encourage the people to obtain the vaccine.

If anyone over the age of 60 or suffering from non-communicable diseases has contracted the virus, they should be hospitalised immediately. The President pointed out that such patients are being discharged early after being recovered following proper medical treatment.

The attention was also paid to the issues concerning the death of persons who are not COVID-19 patients and no one in the family is being quarantined and the need to continue with the decision to conduct the last rites within 24 hours.

Chief of Defence Staff and Army Commander General Shavendra Silva said that the programme to conduct regular medical supervision of COVID-19 patients who are receiving treatment at home is now being implemented successfully.

The measures taken to meet the daily needs of the people during the quarantine curfew period was reviewed and the President emphasized the need to pay special attention to the daily wage earners and low-income earners.

Minister Basil Rajapaksa pointed out the need to control the pandemic while managing the national economy as well.

Minister Bandula Gunawardana explained the programme implemented by the Sathosa to provide essential food items to the people at concessionary prices.

State Minister Sisira Jayakody described the projects implemented by the State Ministry of Indigenous Medicine to provide Ayurvedic medicines to the people covering the entire country to boost immunity.

Minister Dullas Alahapperuma said that all state and private media institutions are committed to carry out their responsible media duty by constantly educating the public on the pandemic and the steps that should be taken to protect from it. The Minister also said that the initiatives in this regard will be coordinated by the Ministry of Mass Media.

Specialist Dr. Prasanna Gunasena, member of the Special Committee on COVID-19 Control, said that it is the responsibility of the public to protect themselves from this virus by adhering to proper hygiene practices.