President Gotabaya Rajapaksa directed officials on Thursday to take steps to ensure that organic fertilizer are available to farmers in time for the Maha season.

The President also stressed the significance of putting in place a comprehensive fertilizer distribution network that involves all sectors.

The right to a toxin-free diet to produce a healthy and productive citizen is affirmed in the “Vision of Prosperity” policy statement. The President’s objective is to direct the country’s agriculture to the use of organic fertilizers in order to make it a reality, the President’s Media Division said.

The President pointed out the need to achieve the goals without inconveniencing the farmer in this endeavor for the benefit of future generations. For that, the production capacity of organic fertilizer should be increased.

The President instructed the officials to import the required quantity of organic fertilizer of the highest quality if they are not satisfied with the quantity of fertilizer produced.

The President gave these instructions during a special discussion with officials of the Ministry of Agriculture and organic fertilizer producers at the Presidential Secretariat recently.

Fertilizer manufacturers say that the total amount of organic fertilizer required for agriculture can be produced locally within a few seasons. 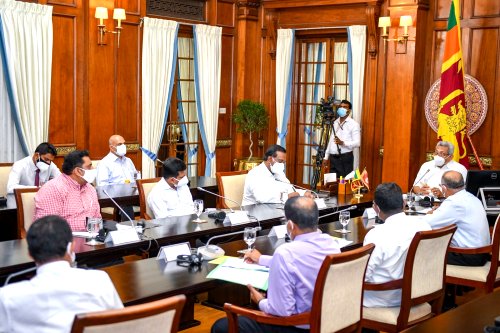 The President said the government spends a lot of money annually to import chemical fertilizers and that the money could be used to encourage the production of organic fertilizer.

It is planned to educate Agriculture Instructors and Agricultural Research Officers at district level on the use of organic fertilizers.

The Ministers in charge of the subject pointed out that the mechanism required to purchase organic fertilizer produced in all parts of the country by the National Fertilizer Secretariat and to distribute the fertilizer according to other crops including paddy has been completed.

The President instructed the officials to inspect the soil at the village level before the Maha season, and obtain a report on the amount of fertilizer to be applied. Minister Mahindananda Aluthgamage, State Ministers Mohan de Silva and Shasheendra Rajapaksa, Secretary to the President P.B. Jayasundera, Secretaries to the Ministries in charge of the subject and organic fertilizer manufacturers were also present at the occasion. – PMD