Sri Lanka’s external sector showed a mixed performance in March 2021 with a widened trade deficit on the one hand, and a healthy growth in workers’ remittances and a slight pickup in the tourism sector on the other, the Central Bank reported Tuesday in its External Sector Performance review for the month.

The deficit in the trade account widened in March 2021, for the first time since April 2020. Both exports and imports were significantly higher in March 2021, compared to March 2020 as well as February 2021.

Meanwhile, the cumulative deficit in the trade account during January – March 2021 widened to US$ 2.059 billion from US$ 1.853 billion recorded over the same period in 2020.

Earnings from all subsectors of industrial exports, Agricultural exports and Mineral exports have improved in March 2021, year-on-year and also recorded considerable increases over February 2021. 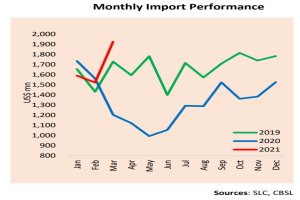 Despite the continuation of the import restriction measures, expenditure on merchandise imports increased significantly in March 2021 to US dollars 1,926 million, which was the highest monthly import value since March 2018.

Accordingly, the import expenditure in March 2021 was significantly high compared to the expenditure of US$ 1.205 billion recorded in March 2020, and US$ 1.524 billion in February 2021. All major sectors of imports contributed to this increase.