A contingent of Indian Air Force (IAF) and Indian Navy personnel arrived in Sri Lanka yesterday (27) to participate in the 70th Anniversary celebrations of the Sri Lanka Air Force (SLAF).

The Indian Air Force aerobatic display teams, the fixed wing “Suryakirans’ and rotary wing ‘Sarang’ , along with Light Combat Aircraft Tejas arrived at Colombo, Sri Lanka, on 27 Feb 21 on an invitation from Air Marshal Sudarshana Pathirana, Commander of the Sri Lanka Air Force (SLAF), the Indian Ministry of Defense said in a statement. 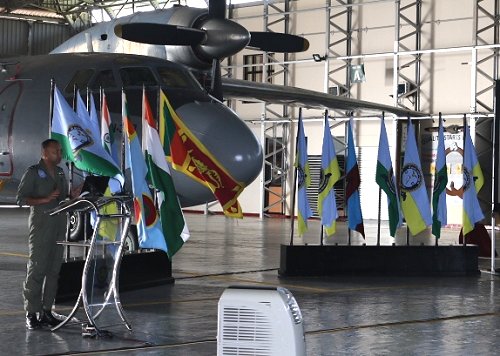 The detachment for the Aerobatic Display arrived in Colombo yesterday, with the support of C17 Globe Master and C130J transport aircrafts of Indian Air Force.

The Sri Lanka Air Force is celebrating its 70th Anniversary on 02 Mar 21 and the presentation of President’s Colors to No. 5 Fighter Squadron and No. 6 Helicopter Squadron of the Sri Lanka Air Force. To commemorate this historical event, a Fly Past and an Aerobatic Display is also being organized for the first time in Sri Lanka at a grand scale at Galle Face from 03-05 Mar 21.

The Suryakirans, Sarang and LCA Tejas will participate in an Air Show at Galle Face, Colombo, scheduled from 03–05 Mar 21 as part of the 70th anniversary celebrations of SLAF.

“As a gesture of solidarity, and in keeping with years of close interaction and camaraderie between the two countries and their militaries, Indian Air Force (IAF) and Indian Navy will participate in the event with an Aerobatic Display by Sarang (Advance Light Helicopter), Surya Kiran (Hawks), Tejas Fighter Aircraft, Tejas Trainer and the Dornier Maritime Patrol Aircraft. A total of 23 aircraft of the Indian Air Force and Indian Navy would participate in the grand event,” the Indian High Commission in Colombo said in a press release. 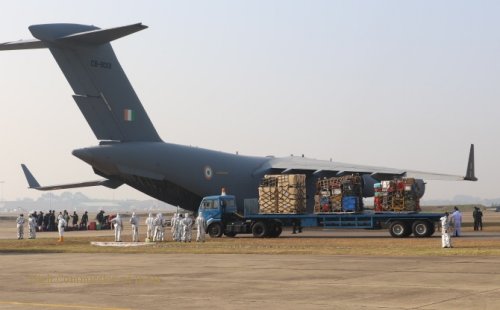 IAF and SLAF have seen active exchanges and interactions for a number of years in diverse fields like training, operational exchanges and through professional military education courses, the Ministry of Defense said.

“IAF’s participation in the 70th anniversary celebration of SLAF is a further manifestation of the strong professional bonds that the two Air Forces share,” it added.

“The deployment of such wide variety and huge inventory of aircrafts and helicopters of IAF and Indian Navy is testimony to the strong bonds of friendship and close interoperability shared between the corresponding forces of India and Sri Lanka services,” the High Commission said.

The IAF Suryakiran Aerobatic Team (SKAT) had earlier toured Sri Lanka in 2001 for the 50th anniversary celebrations of SLAF. “As the IAF aircraft take to the skies of Colombo to mark the event, they will script another significant chapter in the traditionally strong IAF-SLAF ties,” added the statement.

All the Indian aircraft on display are ‘Made in India’ and as such represent the indigenous technical prowess of Indian research and development sector & reliability of products of India’s Defense Industry. Tejas Trainer, on display for the first time, would also afford the opportunity of independent sorties for the Sri Lanka Air Force Pilots, accompanied with the Indian Pilots whilst adhering to relevant strict health guidelines. “Sri Lanka is ‘Priority One’ partner for Indian in the sphere of Defense. The assurance of India’s fullest cooperation in the field of Defense and security was recently reiterated to Sri Lanka’s leadership by the National Security Adviser of India Ajit Doval during his visit to Sri Lanka for the trilateral Maritime Security Cooperation talks among India, Sri Lanka and Maldives hosted by Sri Lanka in November 2020. The participation of IAF and Indian Navy aircraft and personnel in the 70th Anniversary celebration of SLAF is indicative of the growing cooperation, camaraderie and friendship between the Armed Forces of the two nations,” the High Commission said. – Colombo Page