SEC conducts a workshop for CFOs of potential Listed Companies

The Securities and Exchange Commission of Sri Lanka (SEC) recently conducted a forum for the Chief Financial Officers (CFOs) of several private companies with the view of encouraging them to list on the Colombo Stock Exchange (CSE).

The SEC has had a continuous dialog with all stakeholders of the capital market and has emphasized on the need to take aggressive measures to develop the market in order to ensure that it is the preferred place to raise capital.

Only a few companies have listed on the CSE during the last several years and that was seen as one of the reasons for inadequate level of liquidity and relatively small size of the market. The SEC recently approved a new framework for listing of companies, granting complete autonomy to the CSE in the listing process and has also relaxed the Listing Rules in order to encourage more listings. 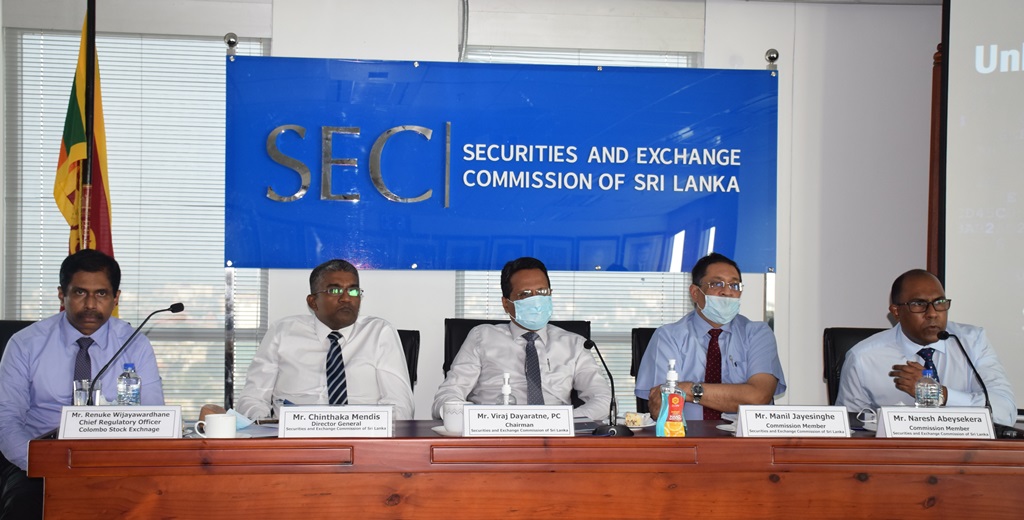 The aim of this forum was to reach out to companies that are not listed in order to make them aware of the benefits of getting listed and to apprise them of the key proposals included in the  Government’s  budget for 2021 which has provided certain tax exemptions to companies who list prior to 31st December 2021.

The Chairman of the SEC Mr. Viraj Dayaratne PC made the opening remarks and explained the advantages of obtaining a listing, especially during the current positive market environment and stated that the process involved in listing a company was not as cumbersome or expensive as is generally perceived. He requested them to take the message to their respective Boards.

Those present had the benefit of insightful presentations by the Chief Regulatory Officer (CRO) of the CSE Mr. Renuke Wijayawardhane and Commission members of the SEC, Mr. Manil Jayesinghe and Mr. Naresh Abeysekera.

Mr Wijayawardhane outlined the requirements and processes involved in listing and Mr. Jayesinghe explained in detail how listing on the CSE was an attractive option for companies to raise funds. He highlighted as to why this method of raising capital was more advantageous than other methods through which a company was able to raise capital.

Mr. Naresh Abeysekera pointed out how the digital platform can be used to raise capital in the near future and benefits that listed companies can derive from the CSE mobile application.

The forum concluded with a panel discussion featuring the Chairman, the two Commission members, Director General Chinthaka Mendis and the CRO of the CSE. The panel discussion created the space for a dialogue between the panelists and the CFOs who participated at the forum.

The SEC intends in the future to organize events where the Chairmen/ CEOs of companies would be spoken to in order to take this initiative forward.

A Year of Resilient Performance, Reaching Milestones and Banking with Due Responsibility